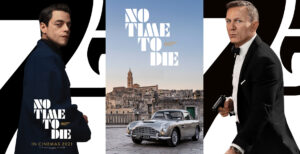 I am sure that I am not the only one to be totally devastated that Daniel Craig is exiting from his role as the iconic James Bond, but ‘No Time to Die’ is an extremely apt point of departure. This is a trip to the cinema where you can expect to encounter the unexpected.

Over the years we have seen Ian Fleming’s iconic character develop, transform and adapt to the culture of the era. No longer is he the suave spy of the 60s who emerged from a tumultuous fight totally unscathed, immaculately attired and with every hair on his head in place as portrayed by Sean Connery, David Niven, George Lazenby, Roger Moore, Timothy Dalton and Pierce Brosnan.

When Daniel Craig took over Commander Bond’s mantle in 2006 he introduced an element of believability into the cinematic context which enabled the audience to relate to his character no matter how far-fetched the situation. Bruised and battered, this Bond engendered a 21st Century following who cheered as he picked up the pieces and donned his tuxedo, wooed the beauties and saved the world from megalomaniacs one at a time.

For die-hard Bond fans, ‘No Time to Die’ not only answers many questions but opens up a brand-new world of possibilities. The twists and turns encountered are incorporated into the physicality of the locations and the roads to be traversed as well as the plot… and the magnificent manner in which the iconic Aston Martin encounters and conquers each hurdle highlights pure driving expertise and roadholding.

This time around, Bond is retired and attempting to forge a life away from prying eyes in Jamaica. [Allegedly, this was where Fleming wrote Bond’s adventures surrounded by “the incredible vibrancy of the natural world, the coral reefs, the fauna and the flora” according to Barbara Broccoli in the production notes.] However, it is a short-lived experience as dictated by uncontrollable circumstances which catapult the Commander into a scenario which is as up-to-date and current as one can get.

As with all Bond movies there’s plenty of action and stunts galore, but there are additional elements which are totally unexpected. I hope I have managed to tantalise your taste buds while keeping to my brief of not releasing any spoilers.

This is definitely not a movie for the small screen – the bigger the experience, the better. For instance, make the most of the Imax and Dolby surround sound or even 3D or 4DX… it’s the last time you will see Craig in action as Bond, hoping ‘It’s No Time to Die’.

Get all the latest news and events in and around Rosebank.

© 2022 All rights Reserved. Design by BeMedia