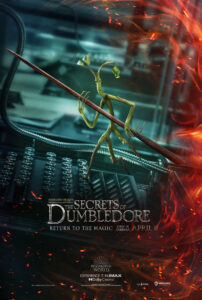 It is no secret that learning is enhanced by presenting facts in story-form… and JK Rowling is an absolute master. In the guise of fantasy, magical creatures and more, she has managed to seamlessly integrate the topics of fascism, child abandonment, unrequited love and so much more. In addition, she has managed to show, via the character Jacob Kowalski, that one doesn’t need to possess super-powers to stand up for one’s beliefs and overcome all hurdles.

As a result of a magically-enhanced pact between Albus Dumbledore and Gellert Grindlewald forged in their youth, Dumbledore is unable to physically prevent the latter from accomplishing his dastardly deeds. Therefore, an intermediary is needed and the first person who comes to mind is Newt Scamander – a Magizoologist whose magical powers and interaction with unique creatures is legendary.

Grindlewald’s plan, as everyone knows by now, is to enhance the dark powers by taking control of the wizarding world… not through popularity, but by force. This is Rowling’s opportunity to introduce the theme of fascism which was prevalent in the early 20th century. In other words, “dictatorial power, forcible suppression of the opposition and the strong regimentation of society”  as characterized by Mussolini, leading to martial law and total military control.

As is wont in these fantastical tales, there are twists and turns plus amazing FX and CGI effects as secrets are uncovered and solutions implemented. Although not as entrancing as previous cinematic journeys, “Secrets of Dumbledore” is definitely worth a trip to the cinema as it continues to lay the foundations for the introduction of Harry Potter’s wizarding adventures – a series of tales which has done more to entice children to read in the 21st Century than any other.

Get all the latest news and events in and around Rosebank.

© 2022 All rights Reserved. Design by BeMedia